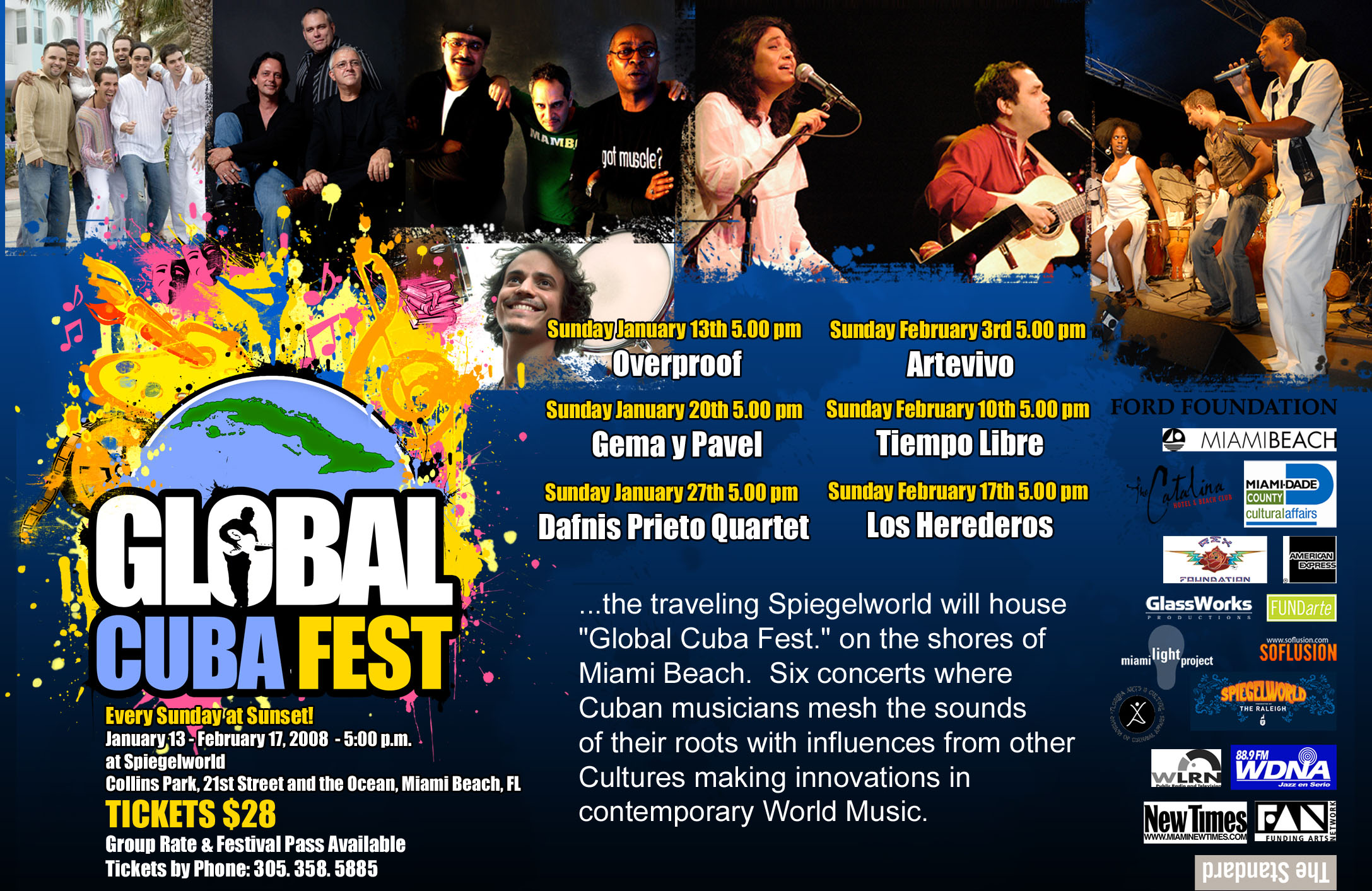 Posted at 14:42h in Fundarte featured by Tony 0 Comments
0 Likes

Miami Light Project and FUNDarte are proud to present the 1st Annual Global Cuba Festival. Presented every Sunday night at 5:00pm for 6 weeks during the inaugural Spiegelworld Miami Beach, Global Cuba Fest will feature some of the best in contemporary Cuban music including Grammy nominees Dafnis Prieto, Tiempo Libre and others!

Overproof is a Latin-jazz based power trio who have recently released their debut recording on the Japanese EWE label and Spanish SONIFOLK label, entitled “3 Guys Walk Into A Bar”. The band was originally formed as a collective by drummer Robby Ameen featuring Cuban Octavio Kotan on guitar and Nuyorican Ruben Rodriguez on bass. The band incorporates latin timba, rock, jazz, and funk elements into one hard-hitting sound which is truly unique in today’s ever growing eclectic world of music.

In a time when so-called fusion has reached great levels of artistic expression, Gema y Pavel have chiseled their path absorbing the various influences that make them distinctly Cuban—the crystalline simplicity of nueva trova, the sonorous freedom of Jazz and Rock, the seduction of el són, and the pulsating rhythms inherited from Africa. Their words unite us in familiar places, and can, through humor and drama, reflect on the human condition. Their most recent release called Arte Bembe (El Europeo) encompasses a new poetic approach to creating Cuban music.

A native of Santa Clara, Cuba, and two time Latin Grammy nominee, Dafnis Prieto studied as a youngster School of Fine Arts and later at the National School of Music in Havana, receiving a thorough classical education and ever broadening knowledge of Afrocuban music, Jazz and world music from no academic sources. Dafnis Prieto has behind him more than ten years of profesional work, going back to his first European tours with a succession of talented pianist including Carlos Maza, Ramon Valle and the “Columna B” Group. 2006 for his record “Absolute Quintet”.

Formed by Enrique Gonzalez on percussions, William Mendez on the guitar and Manuel Camejo as lead voice, the group restates the strength of a musical foundation born from their academic beginnings as chamber musicians during the 70’s, to their evolution as progressive exponents of symphonic rock.

Grammy-nominated Tiempo Libre is one the hottest young Latin bands today.  Equally at home in concert halls, jazz clubs and dance venues, the Miami-based band has become known for their incendiary, joyful performances of timba – an irresistible, dance-inducing mix of high-voltage Latin jazz and the seductive rhythms of son – true modern heirs to the rich tradition of the music of their native Cuba.

Directed by Philbert Armenteros, Los Herederos is a collection of musicians and dancers who represents a colorful musical heritage that fuses Rumba, Guagancó, Timba into Esencia Afro-cubana. Their goal is to show the World the result of the fusion of both cultures: the African and the Cuban through their music. With every performance they seek to promote the essence of their musical culture beyond limits.