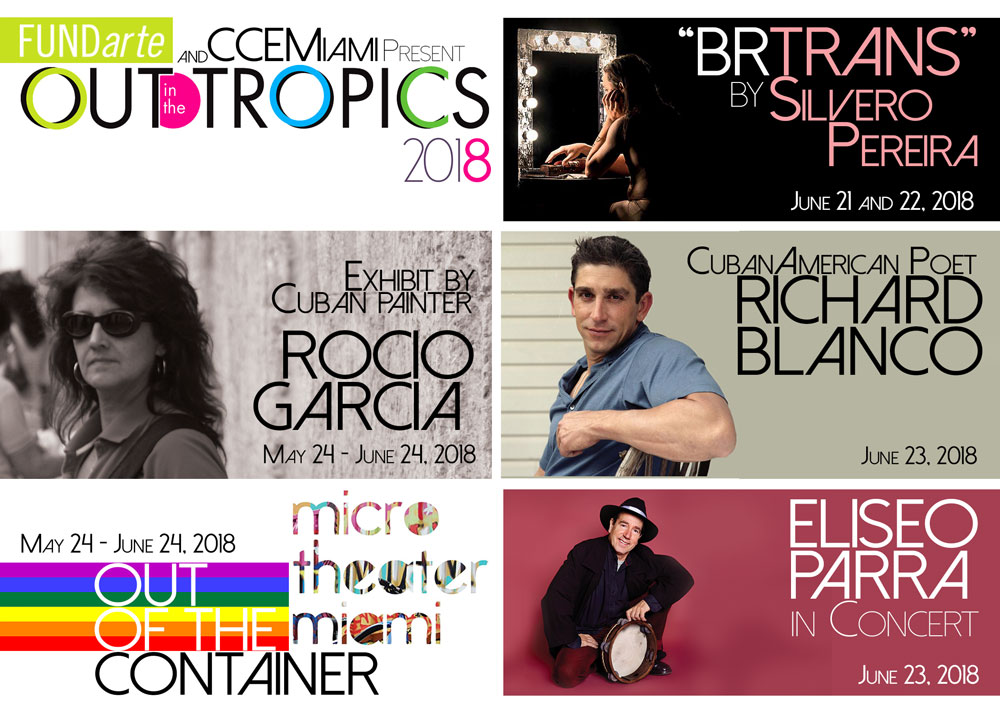 Now in its ninth year, and extended to a month-long series, FUNDarte and Centro Cultural Español (CCEMiami), present Out in the Tropics 2018 (OITT) an exhilarating program of multi-disciplinary performance art; embracing story-rich poetry, a folklorist musician, a prolific lesbian Cuban painter, a Brazilian multi-disciplinary theater performance, and an exciting month-long season of seven new micro-theater plays. The event will run from Thursday, May 24th through to Sunday, June 24th, 2018 in venues across Miami-Dade County.

FUNDarte and Centro Cultural Español present, Rocío García: Beyond eroticism. This is the artist second solo exhibition in the city of Miami as well as her first retrospective to date. García, as curator Elvia Rosa Castro said, “is not only one of the best Cuban artists of all time; she is also a cult artist. Influenced by the sequential nature of film and comic strips, as well as her arsenal of imaginary musings, García creates stories in which the plot unfolds subtly between one canvas and another. While the homoerotic theme is one of the discursive platforms for approaching subjects that transcend it, and although her work is not limited to this topic, it must be noted that no other artist in the Cuban art scene, male or female, within or outside of the island, has even remotely broached this subject with García’s honesty, efficiency, and courage”. Rocío García Nuez was born in Santa Clara, Cuba, in 1955. She studied at the San Alejandro Academy of Arts in Havana between 1970 and 1975. Later, in 1976, she received a grant to study at I. Repin Saint Petersburg State Academy Institute of Painting, Sculpture and Architecture in the former Soviet Union. In 1983, she graduated with a Master’s degree in Fine Arts. Rocío is one of the most renowned artists of contemporary Cuban painting and has taught art for over 30 years at her alma mater in Havana. She has participated in dozens of collective exhibitions, and organized more than 30 personal exhibitions, in Cuba and abroad. Institutions, inside and outside of Cuba, have granted her prestigious awards and artist residencies. She lives and works in Havana. (Thur. – Sun) CCEMiami presents an avalanche of fresh bilingual plays with its 5 weeks season Out of the Container at Microtheater Miami. Micro-plays of 15 minutes for an audience of 15 people performed in 7 different shipping containers.

Purchase advance $tickets for Centro Cultural Español (CCEMiami) | MicroTheater Miami at https://tickets.microtheatermiami.com/ OR at the door (box office opens one hour prior to show-time.) For two-nights only, author, actor, director, Silvero Pereira (Brazil) will perform BR TRANS by Brazilian theater company, As Travestidas. Featuring real stories gathered during a research process undertaken while traveling and working with transsexuals throughout Brazil’s northwestern and southern regions, this emphatic and timely solo-play superbly explores its poignant themes with wit and rich stagecraft.

Thursday, June 21 and Friday, June 22, 2018 at 8:30 PM at the Gleason Room, at the Fillmore, Presented in Portuguese with English supertitles. For one intoxicating evening, renowned Spanish composer Eliseo Parra, performs live with his five musicians, in a not-to-be-missed performance that will renovate traditional folk music outside and beyond the Flamenco tradition on Saturday, June 23rd, 2018 at 8:30 PM at the Gleason Room at the Fillmore Miami Beach. WHERE: The Gleason Room at the Fillmore: 1700 Washington Avenue, Miami Beach

ADMISSION: $25 General Admission per performance / $20 for students (under 18)   and seniors (over 65), Centro Cultural Español (CCEMiami) members. and Miami Beach Residents, with I.D., in person, at the theater Box Office Only. This project has also been made possible by the Program of the state agency Acción Cultural Española (AC/E) as part of the Program for the Internationalization of Spanish Culture (PICE) in the framework of the Mobility grants, which facilitates the presence and collaboration of Spanish artists: Eliseo Parra and Musicians, Josete, Aleix Tobias, Daniel Espasa, Francesc – Xavier Lozano, Guillem Aguilar y Pablo Martin.

Building an Audience I. The Garifuna Collective. FUNDarte for MAMP

Call to Action. FUNDarte for MAMP

2021-09-12
I want to tell you about the power of Call to Action, better known as CTA in digital marketing. The CTA is an instruction to...
View more

2021-09-12
Strategic Alliances   The alliance with Organizations such as Flamenco Festival and Casa Patas Flamenco Foundation from Spain, has allowed us to present the world's...
View more