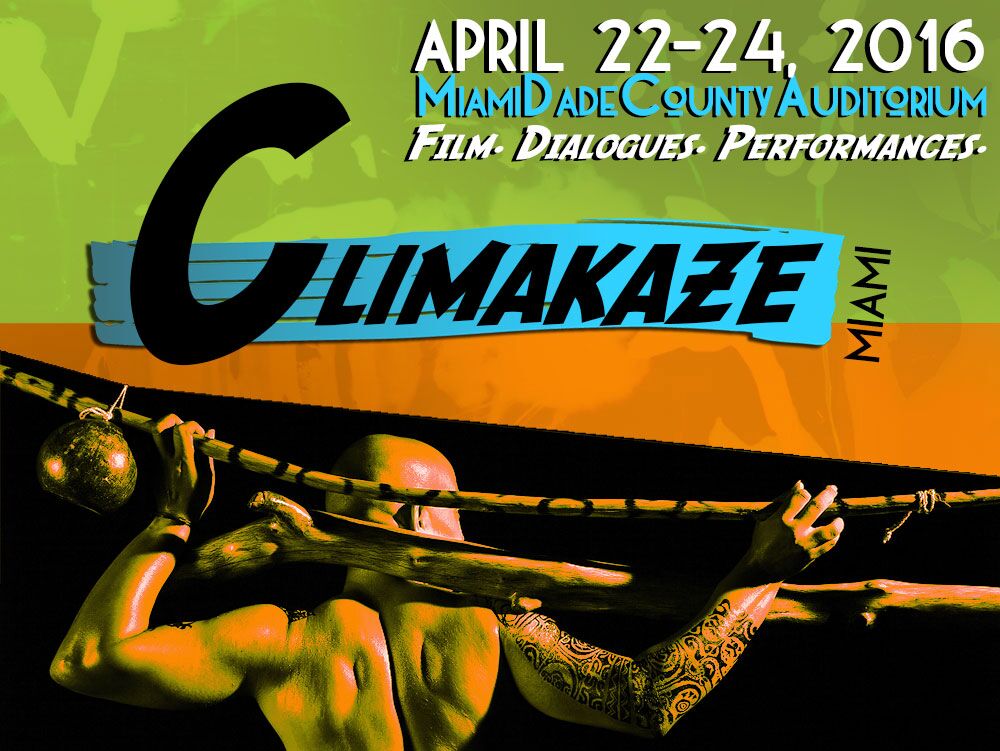 CLIMAKAZE MIAMI is a radically fun event that mixes live performances, participatory conversations and a marine nature excursion in a thought provoking festival format focused on climate change. It brings together the climate-concerned arts community, educators, scientists, activists and climate champions in local government, plus a wide range of climate-concerned citizens.   Climakaze Miami activities and performances throw all these different climate-concerned people together to deliver visionary, risk taking performances, conversations and activities that are committed to positive change in the face of our shared climate crisis.

Experience the movie based on Naomi Klein’s best seller This Changes Everything, The Psychoanalysis of Climate Change by local climate arts pioneer Xavier Cortada, environmental performance by the indomitable theater activist Nick Slie of the Gulf Coast of Louisiana, stunning media performance by Miwa Matreyek of Los Angeles, CA, and Miami’s own Luyanó Band, along with the participation of many diverse guests from all over the Climate Movement spectrum. Elizabeth Doud, Climakaze’s Artistic Director urges Miamians to use culture as a portal into these complex conversations and as a way to take action, “A lot of artists want to do something about climate change…and why not? After all, the arts have the power to raise awareness, connect with people emotionally, provoke thought, and dialogue, and even change the way we live. The arts are really good at connecting with communities, too. Many experts working on the challenges of climate change often say they struggle with getting their message out. That’s where Climakaze Miami comes in—to help connect the arts as a positive force in facing Climate Change challenges.”

For Event Registration, go to: http://climakazemiami.org/event-registration/

SCHEDULE AT A GLANCE:

Performance Marathon, go to www.climakazemiami.org for detailed schedule of

For individual evening movie tickets for This Changes Everything – The Movie on Friday, April 22 at 8:00 p.m., go to: https://www.tugg.com/events/89999

If you would like to apply for event participation as a Climakaze volunteer,

ABOUT THE FILM AND PERFORMANCES:

For complete information on artists, contributors, film, performances and activities, go to: http://climakazemiami.org/event-schedule/ Film Screening – This Changes Everything – The Movie

What if confronting the climate crisis is the best chance we’ll ever get to build a better world? Filmed over 211 shoot days in nine countries and five continents over four years, This Changes Everything is an epic attempt to re-imagine the vast challenge of climate change. Throughout the film, Klein builds to her most controversial and exciting idea: that we can seize the existential crisis of climate change to transform our failed economic system into something radically better.

Performance #1 – The Psychoanalysis of Climate Change by Xavier Cortada

This world premiere performance experience conceived of by Miami’s own Xavier Cortada, current Artist-in-Residence at Florida International University’s School of Environment, Arts, Society & the College of Arts & Sciences, and College of Architecture + The Arts exposes and examines the unnamed crisis of the human psyche around climate change and environmental collapse realizations–both in our consciousness and subconscious. FUNDarte presented,  This World Made Itself  by Miwa Matreyek at Miami Dade County Auditorium. Saturday, April 23, 2016. Picture by Generacion Asere.

Performance #2 – This World Made Itself  by Miwa Matreyek

This World Made Itself is a multimedia live performance work combining projected animation and the artist’s own shadow silhouette as she interacts with the fantastical world of the video, merging film and theater to create something that is its own kind of spectacle. Created and performed by Los Angeles based artist Miwa Matreyek, This World Made Itself is a visually and musically-rich journey through the history of the earth, from the universe’s epic beginnings to the complex world of humans. The piece is at once semi-scientific, emotional and dream-like, rich in surrealism and metaphor, palpable and fantastic. Loup Garou is an environmental performance that uses the Cajun werewolf myth to explore the deep interconnectedness between land and culture in Louisiana. Conceived and performed by native Louisianan Nick Slie, it is part performance, part ritual, part howl to the world about southeast Louisiana’s plight.   Driven by climate-crisis related occurrences, every half hour, Louisiana loses nearly a football field’s worth of coastal marshes to the Gulf of Mexico. Land loss is ubiquitous, and six major hurricanes in the last four years have exacerbated an already dire situation. In Louisiana, so many cultural traditions and industries derive directly from relationship with the surrounding rich environment. What will become of those traditions as the land that nurtures them disappears? Luyanó Band presents an evening of original music that blends projected images and their unique brand of World music. Through their music, Luyanó Band is looking for a way of unifying not only music styles and genders and instruments, but world ancestral wisdom legacy with contemporary life. By reaching a harmonious result on stage, it might be possible to create that same harmony as a community. The audiovisual experience they present is an exciting assault to the senses: from the roots to contemporary, from East to West.

Please go to http://www.climakazemiami.org for details on excursion registration and itinerary. Capacity is limited.

FUNDarte believes culture’s role in progressive climate action is inevitable and can be networked more deeply to expand partnerships and engage citizenry in meaningful ways. Conversely, cultural organizers need partners in the non-arts sector who are working on the front lines of education, conservation, environmental justice and mitigation. To address this issue, we founded Climakaze Miami in 2015, a platform for performance and dialogue at this cross section of cultural collaboration and climate action.

For additional organizational information, visit www.fundarte.us or contact Ever Chavez at 305.316.6165.