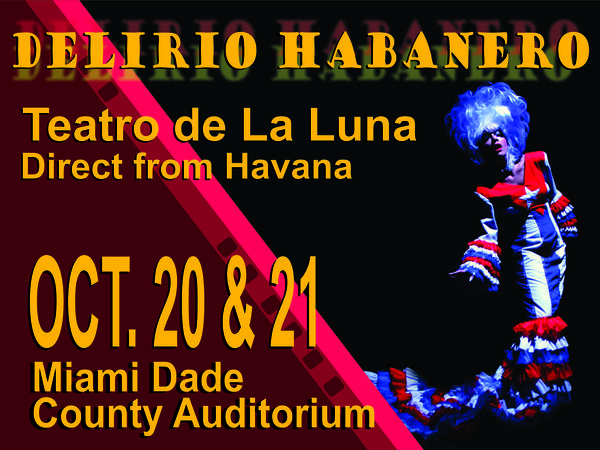 Posted at 15:21h in Fundarte featured by Tony 0 Comments
0 Likes

Havana Delirium/Delirio habanero:
Every night, in an old abandoned bar, three delirious characters come together, believing themselves to be famous stars. There, they find refuge from the hostile environment that surrounds them; and there, they invite us to relive each of their personal stories, loaded with music and emotion.  Celia Cruz, Beny Moré, and legendary lounge singer Varilla, appear to reincarnate in these three beings who must ultimately face an inevitable end…

Havana Delirium/Delirio habanero is set in 1990s Havana during the Special Period in Times of Peace, marked by the collapse of the Soviet Union and Cuba’s free fall into economic, social, and moral chaos. The play embarks upon the Special Period and flashes back to Cuba’s Hey Day of the 1940s and 50s when casinos and cabarets were at their peak, featuring nightclubs such as The Tropicana. The three characters, set in an atmosphere of “delirium,” believe themselves to be the following cultural icons of the 1940s and 50s: La Reina – Celia Cruz, the Queen of Salsa; El Bárbaro – Beny Moré, the King of Rhythm; Varilla – the famous barman of the Bodeguita del Medio, made famous by Hemingway in the 1950s. They sing, dance, and banter about their lives and troubles to escape from the crumbling world outside. Memories and song help them to relive glorious experiences as they face an inevitable fate. These interactions comment on political and racial divisions and fragmented societies yearning for reconciliation.

What:             Delirio Habanero by Teatro de la Luna (In Spanish with English supertitles)