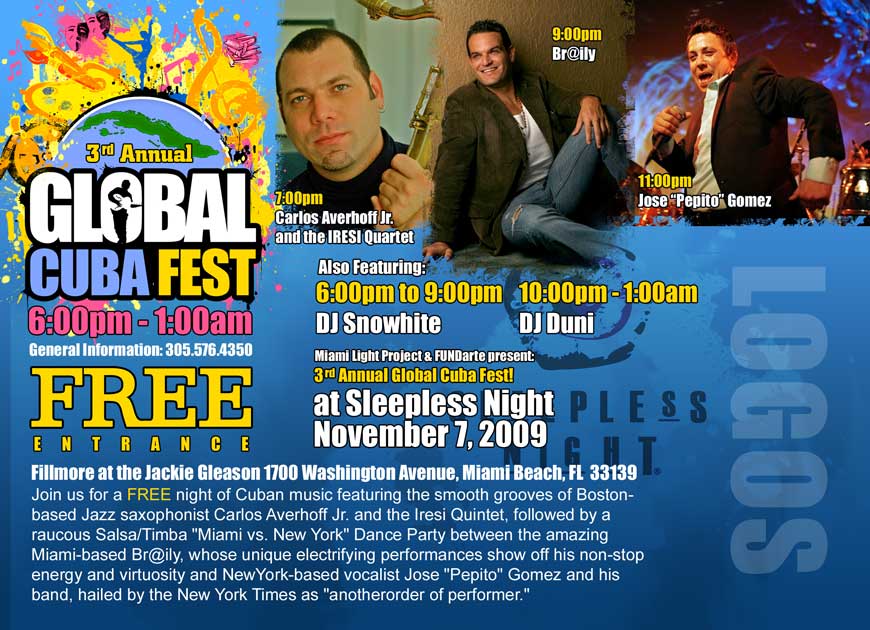 Posted at 17:53h in Fundarte featured by Tony 0 Comments
0 Likes

The evening features a showcase of some of the best of contemporary and time-honored Cuban rhythms, with three extraordinary musical groups mixing the diverse rhythms and genres from around the world to create a new and fresh global Cuban sound!

The night begins with the smooth grooves of the Boston-based Jazz saxophonist Carlos Averhoff Jr. and the Iresi Quintet, followed by a raucous Salsa/Timba ”Miami vs. New York” Dance Party between the amazing Miami-based Timba and Salsa trombone player and singer, Br@ily, whose unique electrifying performances show off his non-stop energy and virtuosity and with New York-based vocalist Jose “Pepito” Gomez and his band, hailed by the New York Times as “another order of performer.”

Keeping the party going all night, DJs Snowhite and Duni will spin in the Fillmore lobby between performance sets. Born in Cuba, DJ Duni is Miami-based and has been promoting Cuban Music for the last 10 years as partial owner of timbastars.com, a website dedicated to promoting timba throughout the world. Born in Cuba and raised in Queens, DJ Snowhite is one of Miami’s leading and most innovative soundscape designers and turntable curators.

Fillmore at the Jackie Gleason

Tenor saxophonist, Carlos Averhoff, Jr. is a recognized Jazz and Latin-Jazz performer, bandleader, composer, arranger, and educator. His inner fire, strength, and relentless energy, combined with an unbreakable discipline and self-awareness, have forged his sound and compositions. His original writings bring together rich harmonics and rhythmic fusions of elements from his native Cuba and the contemporary modern styles of Jazz and Funk. Averhoff, Jr is on a constant quest for revolutionary patterns to color his compositions, achieving at the same time a complex, yet fresh and delectable sound. Born in Havana, Cuba, Averhoff, Jr. began his classical musical studies at the age of 10 at the Manuel Saumell Music Conservatory, following on the footsteps of his father Carlos Averhoff, also a renowned musician and educator, and ex-member of Irakere. His international exposure began early in his career, when at the age of 18; he was selected with a group of students for a Canadian tour. That experienced marked the beginning of a lifelong commitment to the Tenor Saxophone within the style of Jazz and Latin Jazz. He is currently in residence at the Berklee College of Music in Boston, MA where he is the recipient of the North American Scholarship and the Charlie Parker Scholarship Award, one of the most important awards at the college. He is currently launching the IRESI music project while working on his 1st solo album which features original compositions that draw and fuse musical elements from Straight-Jazz, Funk, and Cuban traditional rhythms like Danzon, Son, Bolero, Cuban Timba, and Afro-Cuban rhythmic patterns. Artist Website: www.myspace.com/averhoffjr

Born in Santa Clara, Cuba in 1976, singer, composer, arranger and multi instrumentalist Br@ily Ramos began his musical education at the age of 11 at the Arts Vocational School. After completing four years at the National School for the Arts (Music University of Cuba) as a trombone major, he went on to attend the ISA (Instituto Superior de Arte – Universidad de Musica de Ciudad Habana), widely considered Cuba’s best music school. During his third year of study, he was invited to tour with Manolín “El Médico de la Salsa,” at the time one of the most popular bands in Cuba. In 1998, after 2 years of performing with Manolin, Br@ily decided to make Miami his new home. Together with his multi-talented brother, Bayron Ramos, Br@ily has become the ‘corista’ and trombonist of choice for recordings, live shows and special television & film performances in the area -most notably with Celia Cruz, Willy Chirino, Albita, Eddie Santiago, Tito Nieves, Ismael Miranda, Huey Dunbar, Carlos Manuel, Alejandro Sanz, Gloria Estefan, La India, Lucrecia and Frankie Negrón. Br@ily is also a founding member of the Miami super-group Cuban Timba All-Stars. Well known today as star trombonists, the Ramos brothers have proven they are well-rounded musical powerhouses -singing, composing, recording and playing multiple instruments on their debut release Disco Duro. Artist Website: www.braily.com

Since his May 2008 arrival from Cuba, José “Pepito” Gómez has taken the U.S. by storm. Currently living in New York City, he has become “la voz” (the voice) of Cuban music.  For 15 years he has been astonishing worldwide audiences, fellow musicians, and the press, with his strong, beautiful tenor voice, with a timbre rarely found in popular vocal music. Ben Ratliff of the The NY Times exclaims:  “Mr. Gómez…is another order of performer. For about five minutes he improvised in his thundering, needling high voice, finally settling on a narrow pitch area, starting every torrent with “Oye!,” making the band members look at one another in astonishment and play harder… Pepito Gómez’s vocal tone is a beneficent alarm, a positive shout.”  Gómez currently tours with a powerhouse ensemble of 10 stellar musicians giving tremendous shows in New York, Miami, and the San Francisco Bay Area, the success of which has led to an upcoming European tour. Artist Website: www.josepepitogomez.com

Born in Cuba and raised in Queens, DJ Snowhite is one of Miami’s leading and most innovative soundscape designers and turntable curators. Considered one of the most versatile DJ’s in South Florida, DJ Snowhite boasts a musical format that consists of Neo Soul, Conscious Hip Hop, Old School R & B, Trip Hop, Drum n Bass, Latin, Rock and World Beat blending different types of music together creating smooth transitions and mixes that keep the energy fresh and alive! Her chosen name reflecting her vice-free lifestyle, DJ Snowhite has firmly implanted herself, her music and her tireless work ethic on the South Florida music scene since 1993, sowing the region with her own innovative mixes and dedication and support of artists driven music having created her own wildly successful open mic nights (Faatland) and produced 8 of her own CDs as well as a collection of children’s music CDs inspired by her five and a half year old son. Artist website: http://www.myspace.com/ladyandthetracks

Duniel Deya was born in Havana, Cuba and moved to Miami in 1995. At only 14, he founded Timba.com, the world’s best known web database for Cuban music, which includes concert reviews, Duniel’s blog “En Frecuencia”, photos and interviews. Through the website, Duniel has worked with Issac Delgado and his band, Bamboleo, Giraldo Piloto, Gardi, El Clan, El Pikete, N’Taya, Haila, Tiempo Libre, Elain, Manolin, Pachito Alonso, Pupy, Calixto Oviedo, Alain Daniel, Danny Lozada, Angel Bonne, Carlos Manuel, members of Los Van Van and many others. At 16, he started his career as a local DJ, playing events and private parties. An award winning Salsa dancer and instructor, in 2005 he teamed up with Cristian Muñoz to create a unique online Cuban Music show and website, salsa2salsa.com. As the host of the show, he introduced the internet and viewers to the latest in Cuban music. At the end of 2008 he founded the Cuban music website www.timbastars.com with DJ Melao, which gets over 10,000 visitors per week. Artist website: http://www.djduni.com/