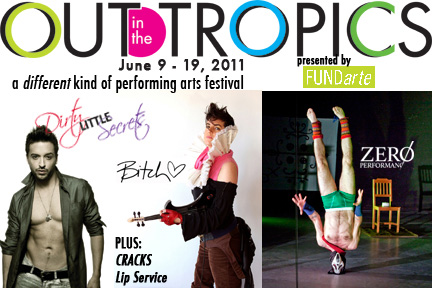 Posted at 14:09h in Fundarte featured by Tony 0 Comments
0 Likes

Out in the Tropics kicks off its second year with a panel discussion and opening reception at our official hotel, The Shore Club. The evening begins with the ideas and insights of some of the best GLBT contemporary artists in Words and Power, a panel discussion moderated by Founding Artistic Director Robert Rosenberg. This opening event features Festival artists Bitch, Keith Hennessy, Andrea Askowitz and South Florida-based performance artist Octavio Campos, in an in-depth discussion addressing how many GLBT artists turn words that have often been seen as oppressive and offensive—bitch, queer, dyke, fag—around to find different, and liberatory meanings. At 8:00 pm, the evening continues with a reception featuring food courtesy of Meals That Heal and a cash bar. 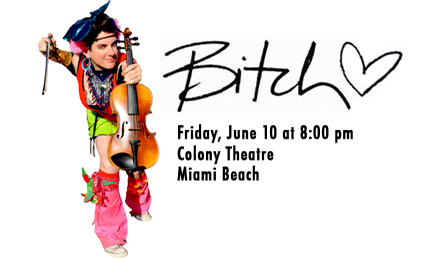 New York-based singer songwriter Bitch takes the stage at the Colony Theatre. According to The Village Voice, “Bitch’s mouthy wordplay and virtuous electric violin playing are ferociously hot.” Bitch, who appeared in John Cameron Mitchell’s 2006 film Shortbus and toured and recorded with Ani DiFranco, has been described as “a music box all of her own.” Bitch’s latest record, Blasted! (2010), continues to push the envelope with her wild-spirited avant-garde “theatrical punk” sound and has produced her most listenable and enjoyable album to date. 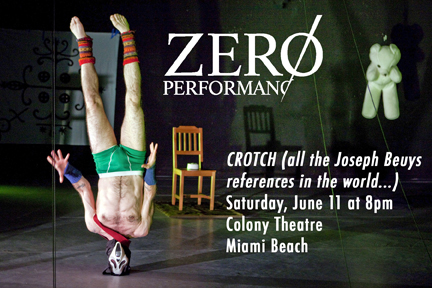 What:             CROTCH (all the Joseph Beuys references in the world cannot heal the pain, confusion, regret, cruelty, betrayal or trauma…)

Keith Hennessy’s Bessie-awarding winning piece was presented to critical acclaim at New York’s Dance Theatre Workshop in 2009. CROTCH references the images and actions of legendary conceptual artist Joseph Beuys. On the surface, the work is about art—its histories and heroes. On a deeper level, a sadness grows within a queer divorce melancholy. Hennessy was a pioneer in the queer performance scene in San Francisco during the 1980s and 1990s. He has been featured in several books and documentaries, including David Gere’s “How To Make Dances in an Epidemic,” Richard Mohr’s “Gay Ideas,” and Dancers in Exile. 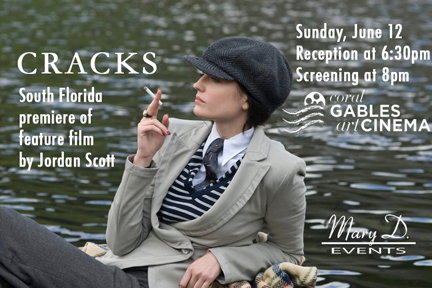 Mary D. Events hosts a Women’s Reception prior to the screening of the film, CRACKS, an official selection of the Toronto and London BFI Film Festivals. Crushes, “cracks” in British slang, and jealousies are the ruling passions of this beautifully realized debut film from Jordan Scott, daughter of the legendary director Ridley Scott. Set in a 1930s-era isolated English all-girls boarding school on the eve of WWII, CRACKS starts “Bond-girl” Eva Green in a blistering performance as “Miss G,” a glamorous teacher who is idolized as the coach of the cliquish student diving team.  When she suddenly turns her attention to a beautiful, new teen from Spain, all bets are off. The film evokes a by-gone era as well as the very real erotic and emotional tensions between young women of any decade.
There will be additional screenings of CRACKS through June 16th. Full schedule and theater info at www.gablescinema.com 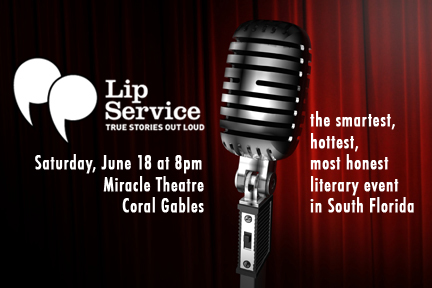 The popular literary event returns to the Miracle Theatre after its last sold-out event presented in partnership with WLRN’s Under the Sun. Produced by Andrea Askowitz (author of My Miserable, Lonely Lesbian Pregnancy) and Esther Martinez, Lip Service is a storytelling series featuring stories that are hilarious, heartbreaking, poignant, embarrassing, inspiring and all true. Celebrating its five year anniversary, Lip Service made its radio and television debut on WLRN this past month. At this tonight’s special event, eight South Floridians will reveal the truth about their diverse lives including GLBT experiences. The Afterparty at 10:00 pm will be hosted at Books and Books, Lip Service’s long-time sponsor, located at 265 Aragon Ave, Coral Gables. 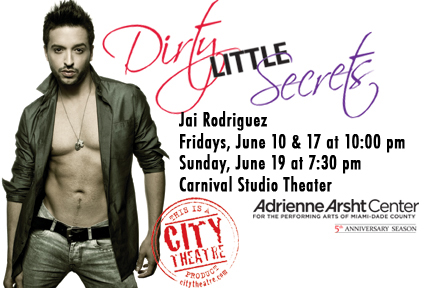 This event is Co-presented by City Theatre and the Adrienne Arsht Center for the Performing Arts
Jai Rodriguez, star of Bravo TV’s Queer Eye For The Straight Guy and Broadway’s Rent and The Producers, dishes the dirt in his hilarious and provocative late night show. Dirty Little Secrets continues Emmy-award winning Rodriguez’ interest in late night. He became a star in the firmament of New York City nightlife when he created his long running Twisted Cabaret in one of NYC’s most notable hotspots, Club XL. Recently, he has created other one-man shows, XPOSED and My Truth, Surviving Sex. On the big screen, Jai most recently appeared in a leading role in Oy Vey My Son Is Gay.

There will also be an encore performance of Dirty Little Secrets on June 24 at 10:00pm as part of City Theatre’s CityWrights Festival.