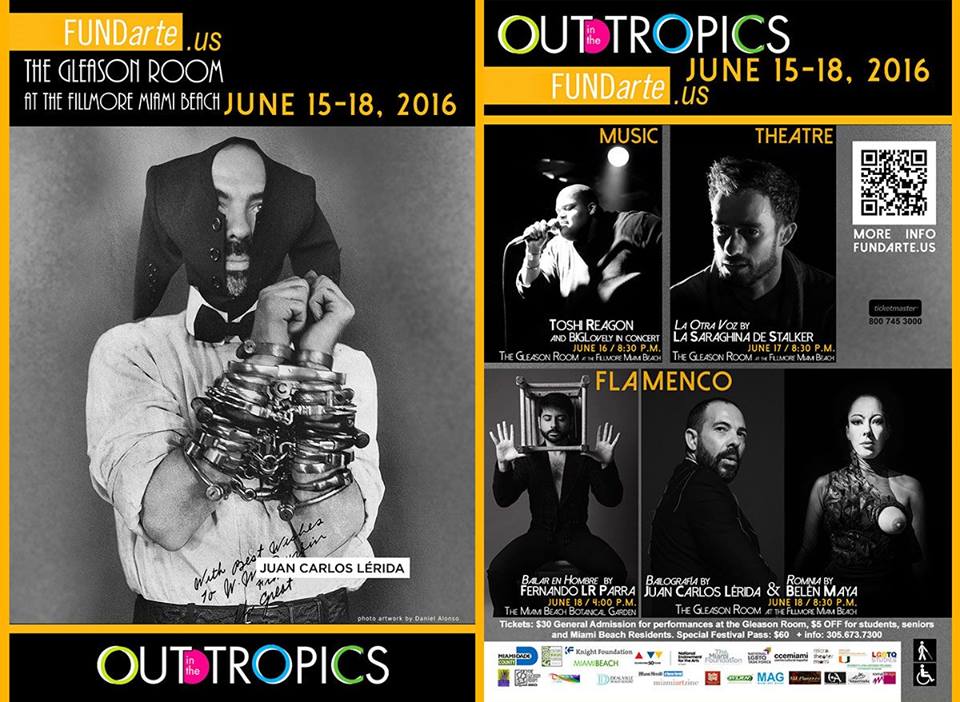 This year’s line-up will also include “Out of the Container”, an LGBTIQ focused series of 15-minute plays with absolute vision and approach, which will run from June 9th to July 10th, 2016 at CCE Miami’s MicroTheater. MicroTheater is a theatrical convention consisting of works of less than 15 minutes in length for a maximum of 15 spectators presented in a 20-foot container. Each work is presented six times each night in continuous sessions.

WHERE:         Miami Beach Botanical Garden, the Gleason Room at the Fillmore in Miami Beach, and other venues (TBA)

COST:            Panel discussion and performance at the Miami Beach Botanical Garden and Series Educational Events are Free to the Public. (Please RSVP to niurca@fundarte.us)

Performances held at The Gleason Room Backstage at the Fillmore Miami Beach are ticketed events. See pricing information below.

Tickets: $30 General Admission for performances at the Gleason Room, $5 OFF for students (under 18) and seniors (over 65), with I.D. and Miami Beach Residents. Purchase through FUNDarte at www.fundarte.us, www.ticketmaster.com and by phone (800) 745-3000 (ticketmaster) or (305) 673-7300 (Fillmore Miami Beach Theater). Tickets also available at the Fillmore Miami Beach Theater Box Office: Monday thought Friday 11:00 a.m. to 6:00 p.m. Group rates are available.

Special Festival Pass: Tickets to all three shows available as a package for $60

Tickets for MicroTheater: $5 per show for General Admission and $4 per show for members of CCE Miami. Tickets available at the door. 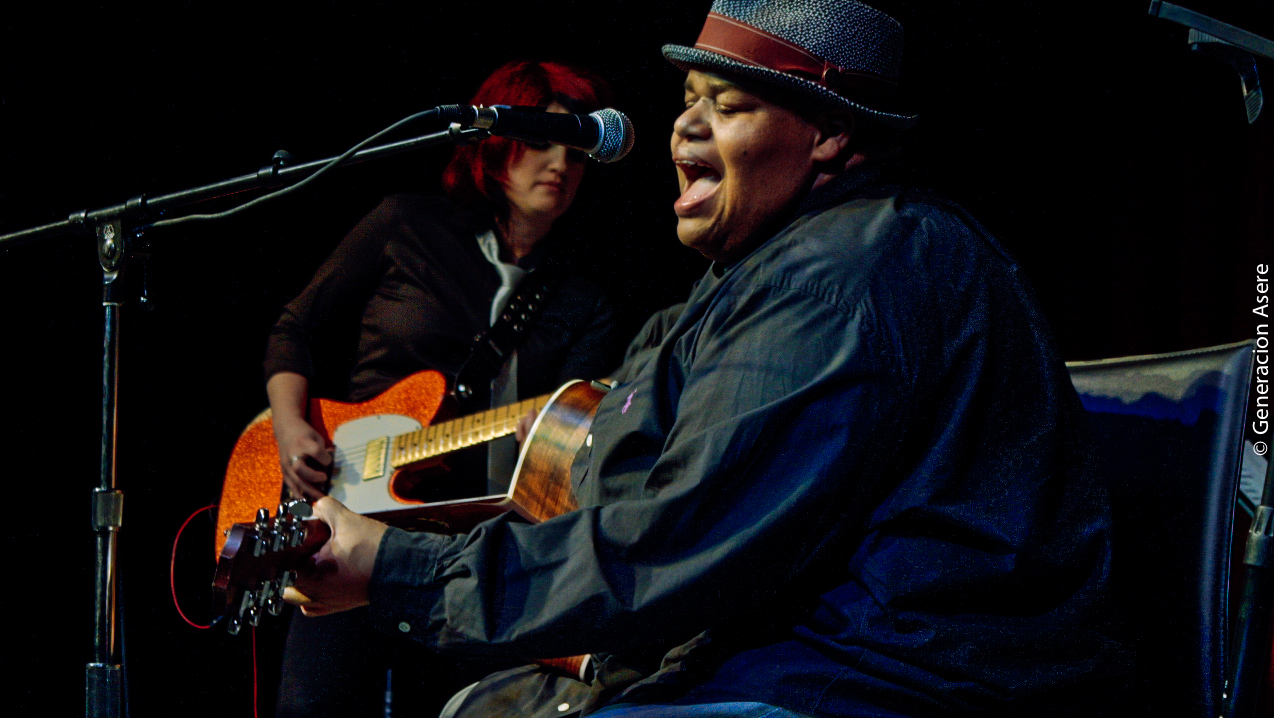 Toshi Reagon and BIGLovely in concert, presented by FUNDarte at The Gleason Room at the Fillmore Miami Beach. June 16, 2016. Picture by Generacion Asere.

At The Gleason Room at the Fillmore (1700 Washington Ave, Miami Beach)

rs as “a treasure waiting to be found,” Toshi Reagon is a one-woman celebration of all that’s dynamic, progressive and uplifting in American music. The New York Times has described her blend as “…a love of mixing things up…[her] vocal style ranges from a dirty blues moan to a gospel shout to an ethereal croon.” A Ford Foundation Art of Change Fellow and daughter of Freedom Singers co-founders Dr. Bernice Johnson Reagon (Sweet Honey in the Rock) and Cordell Hull Reagon, she will be presenting an unforgettable night of original music alongside her band BIGLovely. This irresistible live performance is one not to be missed!

More information about this artist at: https://toshireagon.com/

at the Gleason Room Backstage at The Fillmore Miami Beach (1700 Washington Avenue, Miami Beach) in Spanish with English translation.

La otra voz is an impactful, dialectical work about the homo-erotic love affair of two men, written and directed by Spanish playwright Manuel De. Based on the acclaimed monodrama La Voix Humaine by Jean Cocteau, which explores ideas, feelings, and the “algebra” of human needs and realities in communication, this new work by La Saraghina de Stalker of Spain, has garnered considerable acclaim from audiences and critics alike, most recently at the International Theater Festival in Havana. From his singular perspective, Fernando LR Para presents “Bailar en hombre” (Dancing in Male): Creative Process and Research on Flamenco Dance from a Queer Perspective,” a unique performance and conference based on his staged work “Bailar en hombre” (Madrid 2015). The work is the culmination of his research spanning over two years on the construction of masculinity in flamenco dance, the male-female relationship and their respective roles in this space and finally, the deep connection, in his view, between gender and sexuality. Bailografía by Juan Carlos Lérida, presented by FUNDarte at The Gleason Room at the Fillmore Miami Beach.  June 18, 2016. Picture by Generacion Asere.

Marcel Proust once said that some memories are like mutual friends, they know how to bring about reconciliations. In “Bailografía” Juan Carlos Lérdia offers just that, a work composed by looking back at its own trajectory, with a natural revision imposed by the passing of time and its experience and evolution. Each time it is performed, a guest artist will be invited to take part in this danced biography.

I wanted to project myself from present to future and not from past to future with this work, and suddenly I found myself doing a piece about things past. I thought, “what am I doing? I’m schizophrenic.” Until I understood that I’m not talking about the past, I’m just making present the memory of my body. Romnia by Belén Maya, presented by FUNDarte at The Gleason Room at the Fillmore Miami Beach. June 18, 2016. Picture by Generacion Asere.

Romnia is a celebration of Gypsyness, without victimization. Instead it is a sometimes compassionate, sometimes joyful look at the plight of women, whose courage to survive has led them to a new ethical and aesthetic commitment. Belen Maya presents the mysterious ember of alchemy and forges, now in the choreography created for Romnia, a retro-progressive artistic exercise where her movements –her roots and her wings- are simultaneously going back to the beginnings and towards the future.

Romnia is a journey into two dimensions of my identity: my gypsyness and my femininity. It is filled with non-flamenco gypsy voices that overflow with depth.

Project and organizational support for FUNDarte’s Out In The Tropics 2016 comes in part from the National Endowments for the Arts; John S. and James L. Knight Foundation; the City of Miami Beach Cultural Affairs Program, Cultural Arts Council, and the Miami Beach Mayor and City Commissioners; the Miami-Dade County Department of Cultural Affairs and the Mayor and Board of County Commissioners; State of Florida, Department of State, Division of Cultural Affairs and the Florida Council on Arts and Culture; the GLBT Community Projects Fund at The Miami Foundation and the National LGBTQ Task Force; Miami Beach Botanical Garden; Miami Beach LGBT Visitor Center, University of Miami Departments of Women and Gender Studies, LGBT Studies, and Modern Languages and Literatures; Romaldesign; Generación Asere; Glassworks Multimedia; Nu Flamenco Collaborative; The Deauville Hotel; Miami Art Guide; MiamiArtZine; and The Miami Herald.